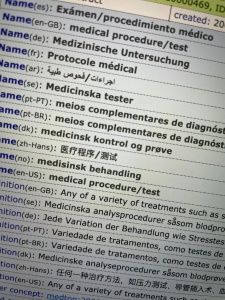 We have just released a new version of IPTC NewsCodes, which includes many changes to Media Topics.

This is the first major update since August 2020 (although we released new versions in September and October 2020 to add translations of new terms).

The changes are detailed below:

After many requests, we have now added an “en-US” language version, based on a contribution by Jeff Brown of Fourth Estate. Thanks Jeff!

Mostly it simply changes British English words to US English, such as “centre”/”center” and “programme”/”program”, but there are a few more substantive changes around cinema / movies and changing “holiday” to “vacation”. Also where Jeff had suggested changes to definitions, we often changed them for both British and US English.

en-GB will still be the primary language for Media Topics, but we will keep the en-GB and en-US versions in sync as we make changes.

These were suggested by our collaborators from Ritzau via iMatrics, NTB, TT and AFP. Thanks to all.

Please note that the new terms only exist in en-GB and en-US right now, .

Update on 12 April: We have now also added Chinese and German translations for these new and updated terms and definitions. Thanks very much to members Xinhua and dpa for their help!

Please note that we only ever make changes to labels to make the meaning clearer, we never change the meaning of a term.

Changes to other NewsCodes vocabularies

As usual, the changes can be seen:

Please let us know if you spot any problems. If you are an IPTC member you can post issues, questions and suggestions to the NewsCodes Working Group list at iptc-newscodes-dev@groups.io.