This post is part of a series about the IPTC Spring Meeting 2019 in Lisbon, Portugal. See day 1 writeup and the day 3 writeup.

Tuesday was our biggest day in terms of content and also in terms of people! We had 40 people in the meeting room which was a tight squeeze, thanks to everyone for your understanding! 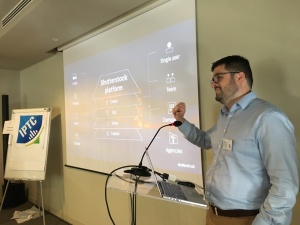 Next, invited visitors Ilkka Järstä and Marina Ekroos from Frameright presented their solution to the problem of cropping images for different outlets, for example all of the different sizes required for various social media. They embed the crop regions using embedded metadata which is of great interest to the Photo Metadata Working Group, as we are looking at various options for allowing region-based metadata to cover not only an image as a whole but a region within an image, in a standardised way.

We had a workshop / discussion session on the recently ratified EU Copyright Directive which will impact all media companies in the next two years. Voted through by the European Parliament this month after intense lobbying from both sides, it could easily be bigger than GDPR, so it’s important for media outlets around the world. Discussion included how and whether IPTC standards could be used to help companies comply with the law. No doubt we will be hearing more about this in the future.

Michael then presented the Video Metadata Working Group‘s status report, including promotional activities at conferences and investigations to see what use cases we can gather from various users of video metadata amongst our members and in the wider media industry.

Then Abdul Hakim from DPP showed a practical use of video metadata in the DPP Metadata for News Exchange initiative which is based on NewsML-G2. An end-to-end demonstration of metadata being carried through from shot planning through the production process all the way to distribution via Reuters Connect. See our blog post about the Metadata for News Exchange project for more details.

Then Andy Read from BBC presented the BBC’s “Data flow for News” project, taking the principles of metadata being carried through the newsroom along with the content, looking at how to track the cost of production of each item of content and also its “audience value” across platforms to calculate a return on investment figure for all types of content. Iain Smith showed the other side of this project via a live demonstration of the BBC’s newsroom audience measurement system.

After lunch, Gan Lu and Kitty Lan from new IPTC member Yuanben presented their approach to rights protection using blockchain technology. Yuanben run a blockchain-based image registry plus a scanner that detects copyright infringements on the web. Using blockchain as proof of existence has been around for a while but it’s great to see it being used in such a practical context, very relevant for the media industry.

Lastly, another new member Shutterstock was represented by Lúí Smyth who gave us an overview of Shutterstock’s current projects relating to large-scale image management: they have over 260 million images, with over 1 million images added each week! Shutterstock are using the opportunity of refreshing their systems to re-align with IPTC standards and to learn what their suppliers, partners and distributors expect, and we look forward to helping them tackle shared challenges together.