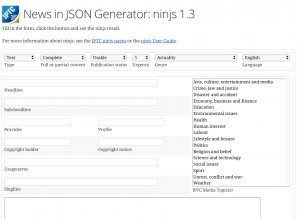 The ninjs generator tool has been updated to the new ninjs 1.3

At last week’s Spring Meeting IPTC updated the News in JSON standard (ninjs) to version 1.3. The JSON schema of the new version can be accessed at https://www.iptc.org/std/ninjs/.

The updated schema now has support for trust indicators, genre, other types of headlines and a way for providers to enter their own alternative IDs.

Version 1.3 is backwards-compatible with previous versions of ninjs and makes no breaking changes.

It includes the following new properties and structures:

The user guide, sample generator and GraphQL sample have all been updated according to the 1.3 additions.

ninjs 1.3 will soon be included in the SchemaStore.org JSON Schema repository, to aid with editing and validation of ninjs 1.3 files in a range of popular code editors such as Visual Studio Code and Visual Studio 2013+, IntelliJ IDEA, PyCharm and PHPStorm.

If you have any questions or comments, please contact the News in JSON Working Group via the public ninjs discussion group, or contact IPTC via the Contact Us form.